Previously on The Bachelor

Previously on The Bachelor
{Hometown Dates} 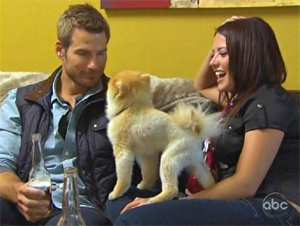 {Brad's first date is with Chantal in Seattle.}
Chantal says that her family is a great judge of character and she will be listening to their input. She tells Brad that she only lives four streets from her parents and visits them often. She introduces him to her pets and tells Brad that they are a package deal. They discuss that he would have to get a larger space to live in. She asks if he has enough closet space and he admits that he definitely doesn't.
That evening he goes to Chantal’s parent’s luxurious home. He tells her family that the first time he met her she slapped him.  Brad and Chantal’s dad had almost too much in common with each other. They find common ground in the fact that both of them come from nothing. He explains that his dad wasn’t envolved in his life but he assures Chantal's dad that he will be a damned good father. He says that he wants to share his life with someone and asks if he thinks if she is ready to settle down now.
Chantal's mother tells her to follow her heart. She explains that she has feelings again and loves him, but she gets scared and wants to go back to what she knows.
Chantal's father gives him his blessing should he choose his daughter. Chantal finds confirmation in her family and Brad tells Chantal that he sees why she is so exceptional. He feels honored to be accepted in this family and sees a future with her. 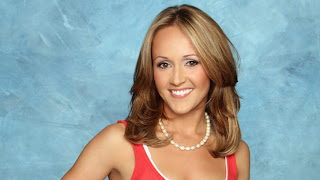 {His next visit is with Ashley in Maine.}
Ashley brought up being “disconnected” once again. Ashley explains that French is often spoken there. Brad accidentally replied in Spanish when he is spoken to in French, but manages the order fine.
They travel about the town and Brad is delighted when they pay by using the honor system at a local vegetable stand.  He really enjoys Madawaska and the small town atmosphere.

Over a family dinner at Ashley's parents house, they toast to the start of whatever comes next with them. Brad reminds them that not only did he choose her, but she chose him as well. Ashley's mom says that if she is not in love with him yet, she is getting there.  Ashley's dad says that she is going to be a dentist and he asks if Brad wants kids. Saying that he is unsure if Ashley is ready yet. Ashley's brother asks if he proposed to her what would she say and she says that she wants to know more about him. 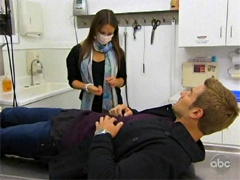 {His next date is with Shawntel in Chico, California.}
She brings him first to where she works, a mausoleum. She says that she feels comfortable with death and wants him to feel the same way. He finds it crazy to think that this is Shawntel's life. She takes him on a tour and shows him the crematorium. He says that if they get married their conversations will center on death. {He does not handle death well} She shows him the prep room and tells him that she spends a lot of time there embalming people. He says he is fascinated, but he is freaked out by everything. He lays on the table looking up at her with a facial mask on and wonders how many dead people have been on that table he is laying on. He says it is a strange, strange experience. {Um..yeah!} He says he has been on a few dates in his life but this is weird and he doesn't need to see a dead body. She says that death is not creepy and there is so much love in the room when people come to her. Brad says that he is impressed by Shawntel and her passion for what she does and it says a lot about her character. Shawntel finds that it is incredible that he was able to do that.
Shawntel takes Brad to meet her parents. She explains that her father has planned for her to take over the family side of the business, but moving to Austin would change that. Her dad shares that he can leave the business in good hands with Shawntel as she is better at it than she is. Shawntel's dad discusses with her that the community would be lost without her being in Chico, pressuring her with the fact that a high school friend died tragically and she was needed there at the business. She explains that if she marries him, she would be going to Austin and she has taken a leap of faith with him. She says that Brad wants to be in Austin and he knows she has strong ties to Chico, and her father says that derails the succession of the business. Before Brad leaves, Shawntel tells him that she is in love with him and says that it feels so good to say it. 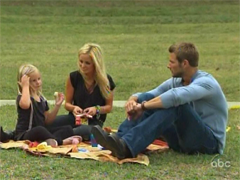 {His final date is with Emily in Charlotte, North Carolina.}
When Emily is reunited with her daughter she holds her and tears up.  She tells Rikki that she is bringing a friend home to meet her. Brad meets Rikki and brings her a present, a kite, to fly in the park where they are going to spend their day. Rikki was very shy and would not even give Brad eye contact for awhile. Eventually Rikki laughs when she gets the kite in the air and becomes more comfortable with Brad. Brad explains that he has never dated a woman who has had a little girl before, but he thinks she is sweet and very much like her mother.
They play board games, hide and seek in the playhouse. Rikki falls asleep and they say good night to her. Emily tells Brad that she can see herself falling in love with him. Brad says that he wants to be affectionate with her, but with her daughter upstairs, he can't.  He says he will hug her and hope that shows how much he cares. She doesn't buy it and says that if this thing works out, Rikki will always be upstairs sleeping. She says that she feels that it is so sweet that he is being respectful and is trying hard not to be disappointed. It has been a good day and they don't want to end it on a bad note. She wants a little piece of that and decides that he is not getting out the door without kissing her first. She gets her kiss at the front door and they are both glad that the date didn't end on a bad note.
{After the Hometown Dates}
Back in New York, Brad and Chris talk about meeting the families. He says that he is reluctant to say goodbye to one of them, but he knows that it will move his relationship forward. He says that his meeting with Chantal O's family was wonderful and he has strong feelings for Chantal.  He was glad to see Ashley be comfortable again and enjoyed her family. He listened to Shawntel talk about her work and realized how much she loves life. He had an amazing time with Emily and was happy to meet her daughter, Rikki.
{The Rose Ceremony}
Chris tells the ladies that it meant a lot to Brad to visit with them in their hometown and he has told him that at the end of this he fully expects to get down on one knee and propose to one of them.
Brad gives his first rose to Ashley.
He gives his second rose to Emily.
His third rose goes to Chantel O.
Shawntel tries to smile as she did not receive a rose and has to tell the other women goodbye. Brad walks her out.
He tells Shawntel that he cares for her and thinks highly of her. He says that he didn't feel the way a man should feel when a girl tells him that she loves him. She tells him that he has set the bar for her and has never been treated by a man like he has treated her. Brad tells her that she will find that guy. Shawntel wishes him all happiness and he hopes that she will be happy as well.
Inside Ashley says that it is so scary because that is going to be one of them next week.  Shawntel says that she didn't see it coming and he was so perfect. She hopes she meets someone like him who will treat her like a princess.
Brad returns to the others and he reminds the three remaining that they have had a lot of fun, but now they are going to travel even farther to South Africa. They all laugh and toast to finding love in one of the most beautiful places in the world.