The Women Tell All

{The Bachelor, The Women Tell All }
Tonight, the women reunited to talk about Brad and their experiences on the show.
Before talking with the girls, Brad and Chris look back on the season and the most memorable women. Brad admitted that Michelle has game {which he said he doesn’t have}.
It was announced that Bachelor Pad will have a second season. We got a sneak peek of bachelor/bachelorette reunions, talk of sexual tension, hook ups and of course {drama}.
The majority of the girls were shocked about the stuff Michelle said in on the show. They said they saw a very different girl in the house and were hurt when they saw her true colors. Michelle says she has a sarcastic, dry sense of humor, which the other girls do not get. Jackie said she was like a spider…crazy and scary. Michelle breaks into tears and apologizes, but the girls keep attacking her, except for Madison and Ashley H. They seem to understand her and defend her. Michelle says she missed her daughter and she pursued Brad so hard because she wanted to make sure it was right. She said that every second with Brad was another second without her daughter.
We get a brief recap of the Melissa/Raichel drama before Melissa takes the hot seat. She feels as if she didn't cause any problems and was being attacked.
Raichel says she was there for the right reasons and was friends with everyone in the house besides Melissa. She accuses Melissa of ruining her chances with Brad.
Melissa apologizes and says they just don't get along. Raichel says she is sorry but still manages to make unkind remarks to Melissa.

Michelle pretty much cries the whole time and keeps saying she was there for the right reasons. She cries and goes on and on about missing her daughter and how guilty she feels for leaving her behind. Stacey says Michelle put herself first, and not her daughter. This makes Michelle cry even harder and bring the audience on her side. {Chris even stops the girls from going on with their negative remarks towards Michelle} She tells Stacey she has no right to say how she is to raise her child. Michelle commented about how mean it was of Jackie to call her a spider. Jackie replied by saying she would never say anything about her being a mom but she didn’t like her as a person. Michelle thinks all the women said things they regret, but she is the one being targeted.
Ashley S is next in the hot seat. It is very sad since she really took it to heart. She thought the first impression rose was a vote of confidence. She says that she has had very bad relationships in the past. In the beginning guys think she is a catch, but realize they don't want a relationship or they cheated. She thought things would be different with Brad and that the 2-on-1 date really hurt, especially being sent home and him picking her best friend Ashley H over her. She wants true love and hopes to get closure with Brad later on.
{Ashley H revealed a new dark hair-do}  After a look back on Ashley's journey, she talks about her last date with Brad and thinks her behavior was a defense mechanism. She admits she felt something strong for him, but was not 100% sure of his feelings for her. {Chris Harrison said that's LOVE} She thinks her actions made her lose out on a great guy. She regrets her behavior a bit and thinks everything is 100% her fault.  She says she was in love but she is ready to move on with her life.

Brad faces the ladies he rejected one last time. He says his heart broke when he let go of Ashley S. She asked Brad why she wouldn’t be a good wife for him. He says her feelings were stronger for others, but who was he to say she wouldn't be a good wife? He said that she is incredible.

He loves Michelle's confidence and thought her interviews were funny.  He just thinks they were too much alike for a relationship to work out.

Ashley H. apologizes for her behavior, but Brad thinks she doesn't need to. He thinks she is exceptional and says their first date was the best first date he had ever had.  He thinks they spent too much time reassuring each other.

Brad says his final choice has changed his life and he is very much in love. He falls in love with her more and more every day. {Chris jokes that there will be no third chance for him}

The best part had to be the fun {bloopers.} They showed clips including: bed breaking, jumping, screaming, sexy dancing from Michelle, naked men and drunken behavior.
They then show clips the final two. Brad talks about his journey with each girl and how much they mean to him. 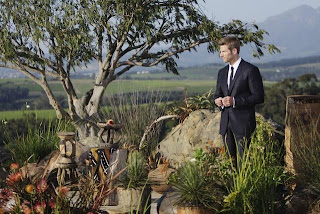 Next week is the season finale and After The Final Rose.
My bet is still on Chantal. Who do you think he will choose?
I can’t believe it is almost over! What am I going to do on Monday nights now?