Previously on The Bachelorette 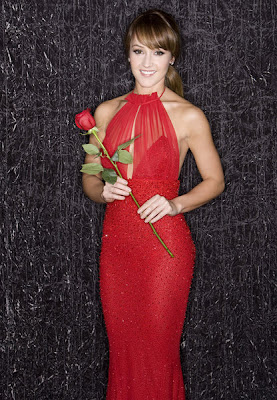 Ashley Hebert begins her journey of finding love.
Those previews are intense. WOW! Bentley seems like a complete JERK! Obviously he is not attracted to Ashley and wishes the bachelorette was Emily. {However, most of this was only shown on previews for future episodes}
Chris and Ashley have a heart to heart her new journey at finding love as the bachelorette.
She goes outside to greet her men.
The Men
-Ryan P is the first guy out of the limo. He says Brad's loss is his gain.
-Jon asks if they can go straight to the honeymoon and carries her around.
-Lucas hugs her since that is how it is done in Texas.
-William is left speechless and is excited it is her.
-Mickey tries to kiss her and says it is from every man in America..Ashley rejected him.
-Tim is also left speechless {Possibly because he is drunk}
-Ben C the lawyer talks to her in French, telling her she is beautiful. It was very sweet.
-Stephen has long hair that Ashley loves. {Yuck}
-Chris D. raps for her. {White boy style}
-West gives her a broken compass pointing west and says it will help her find her way to him. {Very Cute}
-Anthony rambles about blind dates and admits to being nervous.
-Rob, unlike Brad has no crowns.
-Ames knows she enjoys dancing and gives her ballet tickets.
-Matt teaches her the secret handshake he does with his uncle. {Lame}
-Jeff is in a mask so she can learn what is on the inside. {The mask does NOT go over well with the guys}
-Ben F. has a special wine he made for her and gives her a toast. {Ashley loved it}
-Frank kisses her hand, spins her and picks her up while waltzing with her. {So sweet}
-Mike says this is his first time being excited to see a dentist.
-Chris M. is from Canada and has a strong accent.
-Ryan M. takes her picture and wants her to take a picture of him and Chris Harrison.
-JP only has his smile to share.
-Nick recites a poem he wrote to her.
-Blake is also a dentist.
-Constantine makes her a ring out of pink dental floss.
-Bentley acts like he is a little nervous or just really isn’t into her. 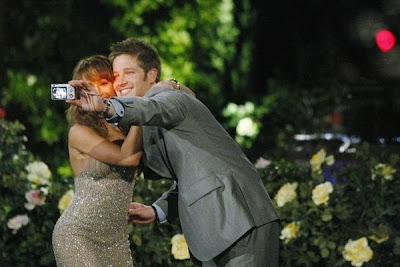 Time to go inside and mingle
Matt brings up his mom and says that if people don't get along with mom, it is all over. {Love momma’s boys!} They even call her! She is excited to talk to her and gives her blessing. She says to remember their moms are watching the fantasy suite episodes and to remember to use protection.
During more mingling, one of the guys pretends to serenade her and throws his guitar in the pool.
People think Jeff is odd, but he just wants to prove there is more to him than his looks. Tim thinks he is a creeper….and the drama begins.
Chris Harrison comes in with the first impression rose, which makes everything more tense.
Ben C. has cue cards while standing on the other side of a window as Ashley was talking to two other guys! This was ADORABLE!
After more mingling, Ashley attempts to talk to Tim, who is so nervous he got drunk and can't communicate. He ends up falling asleep and snoring obnoxiously loud which has him removed from the show.
Jeff  has some one on one time with Ashley and she loves getting to know the real him first.
JP tells a story about being nicknamed Cupcake at work. She says she wants her man to call her Cupcake.
She talks to Bentley and is pleasantly surprised by him, despite being told he was there for the wrong reasons. She is very attracted to him. On the other hand....as Bentley is interviewed privately, he is bashing Ashley and is not happy she is the bachelorette. He is not even attracted to her.
The first impression rose goes to......Ryan P!
ROSE CEREMONY
Jeff, Constantine, Ben F., Lucas, Stephen, Matt, Nick, Chris D, Ryan M, Blake, Mickey, Ben C, West, William, JP, Ames and Bentley get roses.
The men who did not get roses say goodbye.
Some of the men seemed very upset and nearly brought to tears.
The men on this season seem a bit off....or is that just my interpretation?
Will there be a happy ending for Ashley?
Stay tuned!