"Love Strikes in a Flash"
This was the date card Ben C. received. Ben talked with Ashley before about dancing and that is exactly what he got out of the date. Ashley took him to a studio to rehearse a dance routine she choreographed and then they were off to the mall for their date. There was a large crowd of people watching them during their date.Why? Because they are going to have their own Flash Mob routine with everyone there joining them.
She begs him to dance and promises no one is watching even though it is obvious people are taking pictures. Ashley also has one more surprise for Ben….a performance by Far East Movement, the band who performed the song they just danced to. 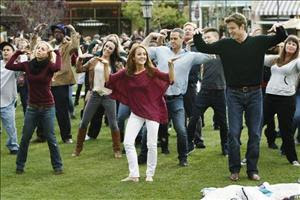 During dinner they talk about love and what they are looking for in a relationship. He wants an everlasting love, which blows Ashley away. He tells her straight out he wants a second date. He gets a rose. They seal the deal with a kiss.
GROUP DATE
Ames, Ben F, Blake, Jeff, Lucas, Ryan, William, Nick, Ryan P, Bentley and Chris D. are on this date and told to make Ashley laugh. 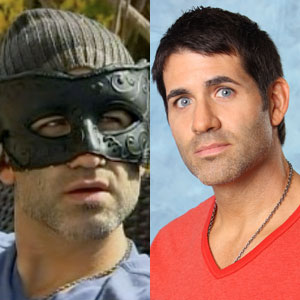 Jeff says today is the day he removes the mask. He takes her outside and shows himself. He removes the mask and he introduces himself for real. Ashley’s first impression was that he is cute but older than she thought.
Back to the group date ---They go to a comedy club and find out that they are meeting with Jeff Ross to create their own roast for Ashley.  He tells the men to not hold back and that they can make fun of each other as well.
Performance time.
Lucas is up first and he makes fun of Ames’s forehead and Jeff’s face.
Ryan wonders why Bentley is still there.
More jabs at the guys…mostly locker room jabbing and then Jeff makes fun of her breasts. Other guys pick on her for being on The Bachelor. Bentley makes a comment on her ass.  William says she is hot, but used and one man’s trash is another man’s treasure. He also says most men were expecting Emily or Chantal.William also asks everyone to donate to the Ashley Boob Fund. 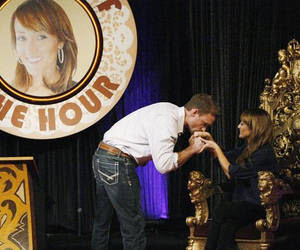 Ashley runs off crying. The guys tell William he went too far.  Bentley comforts her and tries to make her feel better. But he is really trying to get on her good side to get a rose from her.
At the party, everyone still feels bad about what happened. Ashley tells them how insecure she was about being the Bachelorette . William realizes he is an idiot and walks away, wishing he could take that moment back. {It appeared as though he was leaving the show…but he returned}
She talks to Bentley about her worries about him and the rumors she heard from Michelle Money from last season. He basically said Michelle is an unreliable source.
Tonight’s rose goes to Ryan. 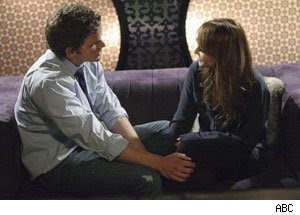 Bentley is leaving?
She admits she is falling for Bentley and can see herself marrying him. Back at the mansion, Bentley is packing up and announces to everyone he is leaving. He lies and says the reason is because he misses his daughter too much. The truth is that he thinks Ashley is unattractive and not his type. He is not looking forward to hurting her but knows it has to happen.  He is going to make her cry….and hopes his hair looks okay.
Once he is at her place, he hugs her and says he is leaving. He says he is leaving because he is missing his daughter and doesn’t want her wondering where daddy is. Ashley cries as they hold each other and she wonders how she can go on and forget about him. She knows it is selfish but she is scared that it isn’t going to work for her now. He picks her up and in a separate interview makes sexual comments about what could have happened and her being the type of girl he would just hook up with every now and then. {This part about him leaving would have been so much more exciting if he told her how he really felt about her}
The clue to the 2nd One on One date:
"There is no place like home"
The second one on one date goes to JP.
Ashley is still sad over Bentley leaving, but goes on with her date. They enjoy wine, food and good conversation about relationships and life while sitting in front of the fireplace in their pajamas. They talk and enjoy each other’s company some more and of course he gets a rose. Ashley compares JP's kisses to Bentleys and says JP's kisses are much better.
The Rose Ceremony
There is no cocktail party. As Ashley goes into the room with all the guys’ photos, she cannot stop looking at Bentley’s and gets upset. She says she is broken hearted.  Chris reminds her that she came on saying there was no regrets. They discuss what a real man would do and if was really in it for her he would make an effort to come back.
She gives roses to Constantine, West, Mickey, Ben F., Blake, Nick, Ames, Lucas, and William.
Tune in next week for an exciting vacation!
Posted by Amber