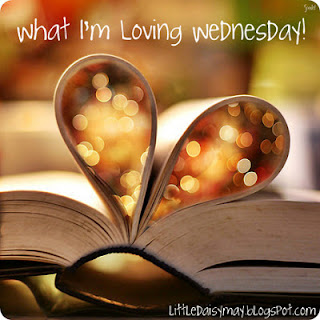 The time has ALMOST come to start sharing pictures of our big day.

This week I am sharing with you all pictures from our rehearsal dinner.

I only have a few pictures to share with you all but it was an absolutely amazing night.
We had a great time with the wedding party and close family. Our dinner was held at the same Country Club our reception was at. We enjoyed great food, a few beverages, some of our favorite homemade desserts and some of us even sang karaoke.

The highlight of the night was definitely when Brad and I exchanged our gifts to each other.
My gift to Brad was very special to him and had many people in the room in tears.
I was not able to hand Brad the gift I gave him so I had to come up with a creative way for him to open something and know what it meant.

His gift had two parts. 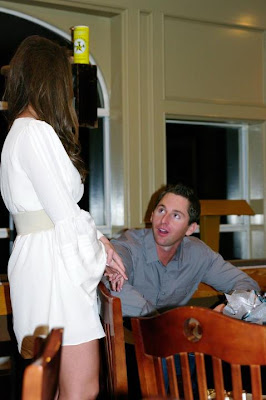 I absolutely LOVE this picture! His reaction is PRICELESS.
This is when he opened the first part of the gift.
I then had him show everyone in the room what it was and explain it. 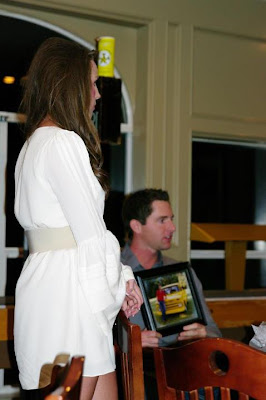 This is a picture of him and a truck in high school.

Now I will attempt to explain this to you all.....
Brad started building a 1966 Chevrolet truck when he was 14 years old.  He completely re-did the motor himself {along with many other things} to make it into a race truck. If you ask anyone in his family or friends that he grew up with, he was always working on "the yellow truck." He was constantly adding something to this truck or doing something to make it faster than all the other cars he raced.

As he was telling the story, Brad's aunt then had to add to the story "THEN YOU SOLD YOUR MOTOR"

So Brad goes on the tell that... When he was in college, he decided he wanted to get some new wheels and tires for the truck he drove every day. Since he lived in a different town and no longer had time to work on "the yellow truck" he decided to sell the motor and use the money to buy new wheels and tires. He knew it was something that he could get quick/easy money off of and that he could eventually get back into building the "yellow truck" later in life if he wanted. Well.....after he sold the motor, he always regretted it. He has told me since we started dating in 2007 "I'm going to get back into it one day"

Here is part two of the gift.
He was VERY excited after seeing a picture of the truck...and was also wondering what in the hell would go to the truck that would fit in this small box. 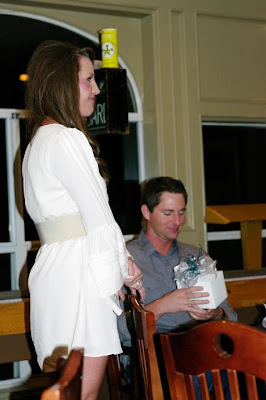 as he opened the box....this is what he found inside 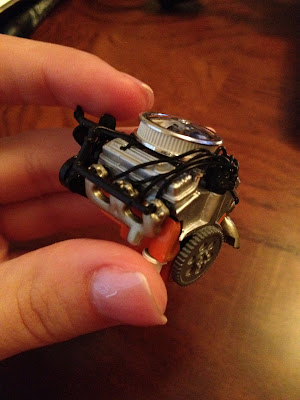 A toy model of a motor.

I then explained to Brad and everyone else in the room that with the help of his brother and dad, I was able to get back the same motor that Brad built....and it is waiting for him to start working on in his Papaws shop when he gets home from the honeymoon.

People in the room started tearing up, Brad was getting just a little emotional...it was a sweet, sweet moment. He then told me that he has no idea how much that means to him...and thanked me the rest of the night. 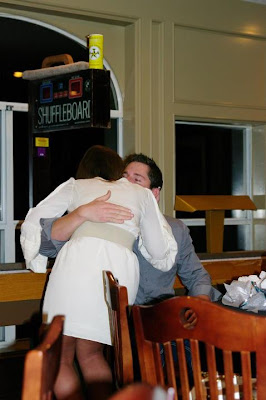 Then it was Brad's turn to give me my gift. He said well I don't really know how to top the gift you just gave me and this won't be near as sentimental to you, but I hope you love it. 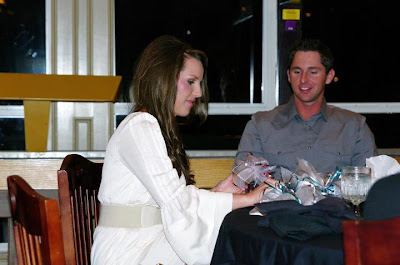 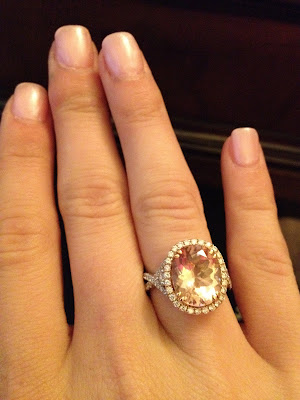 It is absolutely the most perfect right hand ring. I'm in LOVE with this stunning Morganite and diamond ring. Hubby did goooood.

It was definitely a night to remember.  I now have the most GORGEOUS right hand ring and hubby is a happy man always wanting to work on his "yellow truck".
Life is good.
Posted by Amber